While the Beatles may have been sad because “she’s got a ticket to ride”, commuters are ridin’ high thanks to the increasing adoption of touch interactive technology into their journeys.

However, implementing touch technology in semi/outdoor, high footfall areas like train stations, where the potential for damage through adverse weather conditions, vandalism, and interference from passing trains, may leave many touch technology manufacturers shouting “HELP!”,

But not to worry because, “We Can Work It Out!” – with Zytronic’s projected capacitive touch technology emerging as the preferred choice for self-service ticket vending and fare systems especially in applications and locations where   24/7 reliability, all-weather durability and performance are the top priorities.

Durability and Reliability in all conditions 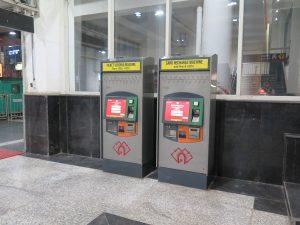 Much closer to Zytronic’s home in the North east of England, Scheidt & Bachmann – a leading German manufacturer of fare collection systems, have installed over 200 ticket machines in 60 metro stations around the Newcastle upon Tyne area. Discover more.

The ticket machines feature Zytronic’s most durable touch sensor range, the ZyTouch®. The 15” sensors are based on proprietary PCT™ technology, utilising thermally toughened and laminated glass, to make sure the sensors offer the very best protection against vandalism, and the changeable North-East weather conditions.

Pointing the way with Digital signage

One of the busiest metro systems in the world, the New York he Metropolitan Transportation Authority (MTA), is making excellent use of larger versions of Zytronic’s robust touch technology, helping tourists and locals alike to navigate the famous subway system. 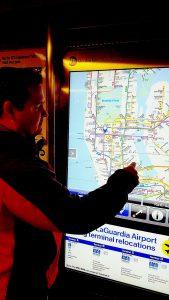 The Zytronic screens replaced earlier versions that were susceptible to the vibration of passing subway trains, causing false touches and malfunctions. Since their installation several years, the Zytronic screens have performed their public service function, reliably and without need for frequent costly maintenance. Discover more.

Commuters in Tokyo are also enjoying the very best service that Zytronic can provide, as a result of the deployment of smart vending machines using 47” ZyBrid® touch sensors, in train platforms and stations throughout the megacity.

The JR East Acure vending machines also offer a unique service for users with targeted marketing techniques using integrated facial recognition cameras and software to identify gender and approximate age, and then recommending drink options most likely to fit with the customers’ demographic.

The smart vending machines show just how well Zytronic touch sensors perform in conjunction with other nearby wireless technologies, such as payment with a smartphone or travel card (utilising near-field communication or “NFC” technology), as well as being robust enough to survive the often harsh weather conditions and extremes of temperature experienced on Tokyo’s train platforms.

So, no matter the conditions, Tokyo travellers can stock up on their favourite snacks and beverages for their “Magical Mystery Tour”, or maybe just a long day in the office. Discover more.

So after “A Hard Days Night”, commuters, and “Day Tripper’s” alike need not fear that Zytronic’s touch technology will let them down, because we’re making sure our technology works hard “Eight Days a Week” to keep our customers happy.

Hi there. We use cookies on our website to ensure that you get the best experience. Learn More